The HFC-227ea extinguishing agent reduces the heat of the fire and thus stops the combustion reaction. It is very efficient yet unaggressive at the same time.

The extinguishing agent is stored as a liquid and transforms into a gas only when it exits from the extinguishing nozzles. It therefore extinguishes, as a rule, even concealed fire sources instantaneously. The rapid extinguishing of a fire already in the nascent phase minimizes the fire damage and prevents long downtimes or business interruptions.

Furthermore, - unlike the case of water, foam or powder - secondary damage caused by the extinguishing agent itself is practically impossible. HFC-227ea is neither corrosive nor electrically conductive, leaves no residue and can easily be removed from the space concerned through ventilation. HFC-227ea is, besides inert gases, the preferred extinguishing agent for electronic and electrical risks. 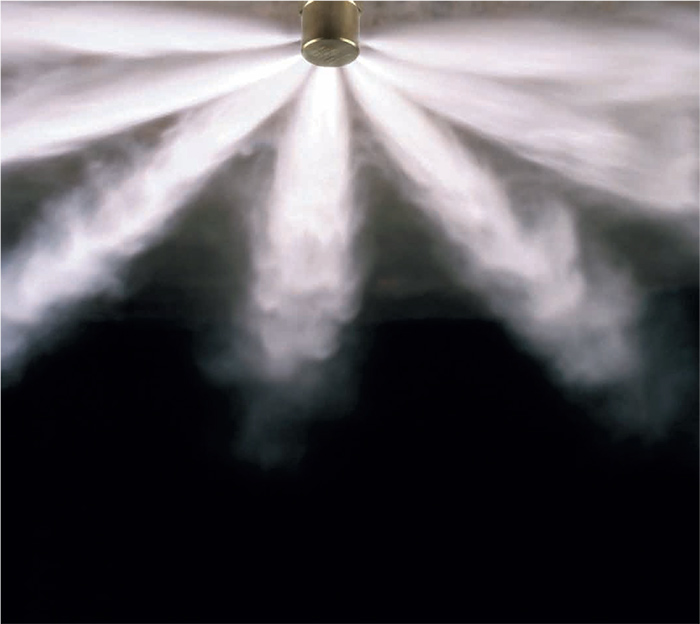 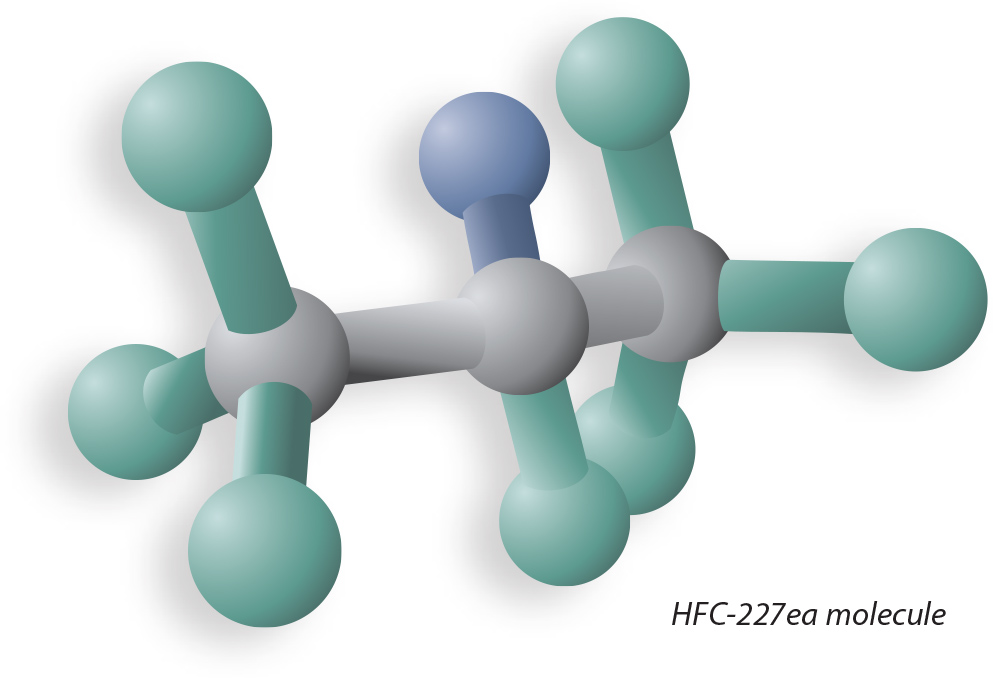 HFC-227ea fire extinguishing systems already achieve their extinguishing effect at a substantially lower design concentration than that of inert gas extinguishing systems. This means that in the event of fire, less extinguishing agent must be introduced, which in turn makes it possible to implement shorter flooding periods. In addition, the pressure relief valve can be made significantly smaller, in most cases.

Furthermore, the comparatively small quantity required for use is stored in liquid form. This allows for extremely compact storage of the extinguishing agent. In addition, in the design concentration of HFC-227ea does not present any health hazard, which is why VSN 200 installations are also suitable for areas that are accessed by people.

In 1992 HFC-227ea replaced halon, which had been banned in the meantime, and since then has been used in hundreds of thousands of fire extinguishing systems. It is better known under its trade names, for example FM-200® from DuPontTM.

In addition to the operating pressures of conventional HFC-227ea fire extinguishing systems of 25 bar and 42 bar, VSN 200 systems are also available in a 50 bar configuration, which offers some significant advantages. For example, they can be adapted individually and tailored specifically to the requirements of the protected area.

This option has the following advantages:

With 50 bar technology, it is possible to set up one multi-zone system instead of several single-zone systems. Multi-zone systems jointly use a single stock of extinguishing agent for all rooms, while in the case of single-zone systems, a separate storage facility must be provided for each room. This reduces costs and saves space, especially if several rooms of a similar dimension have to be protected in a building. 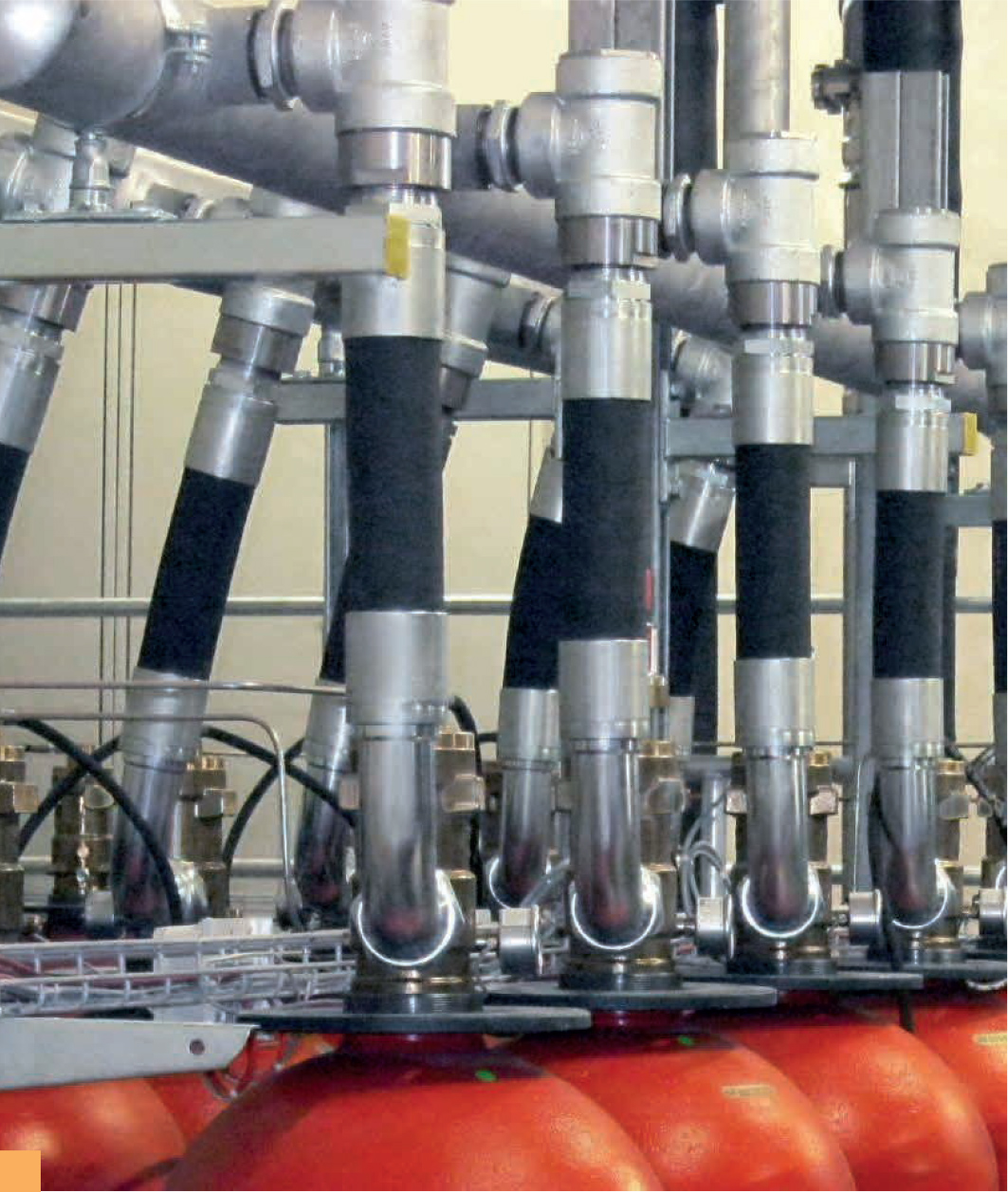 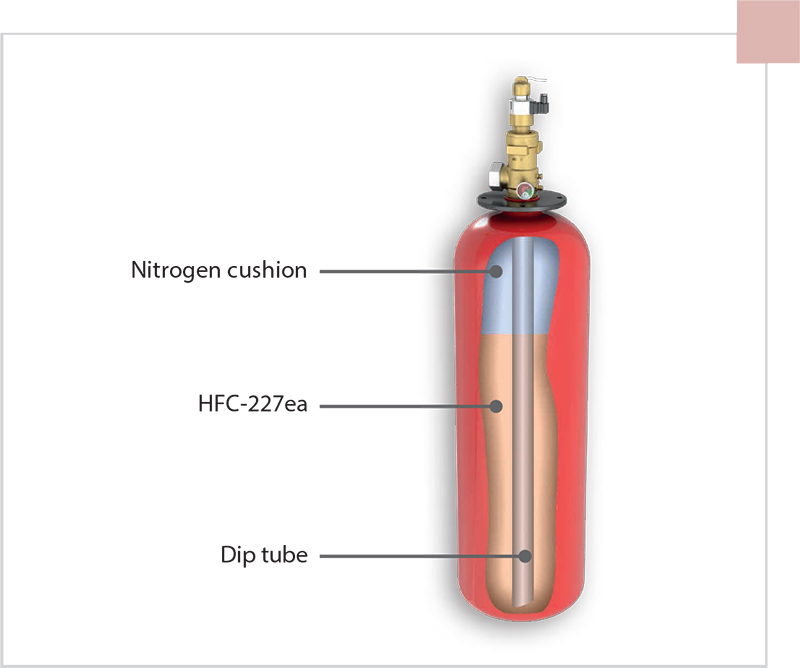 Smoke detectors continuously monitor the extinguishing zone and send a signal to the fire detection and extinguishing control panel in the event of a fire. In the case of single-cylinder systems, the control panel then opens the electrical valve of the extinguishing agent cylinder to release the agent into the pipework. In the case of multi-cylinder systems, the first cylinder is electrically activated and through the nitrogen cushion in this first cylinder, the other cylinders are triggered pneumatically. At the same time the fire detection and extinguishing control panel triggers an audible and visual alarm, whereby persons present will be asked to leave the room. 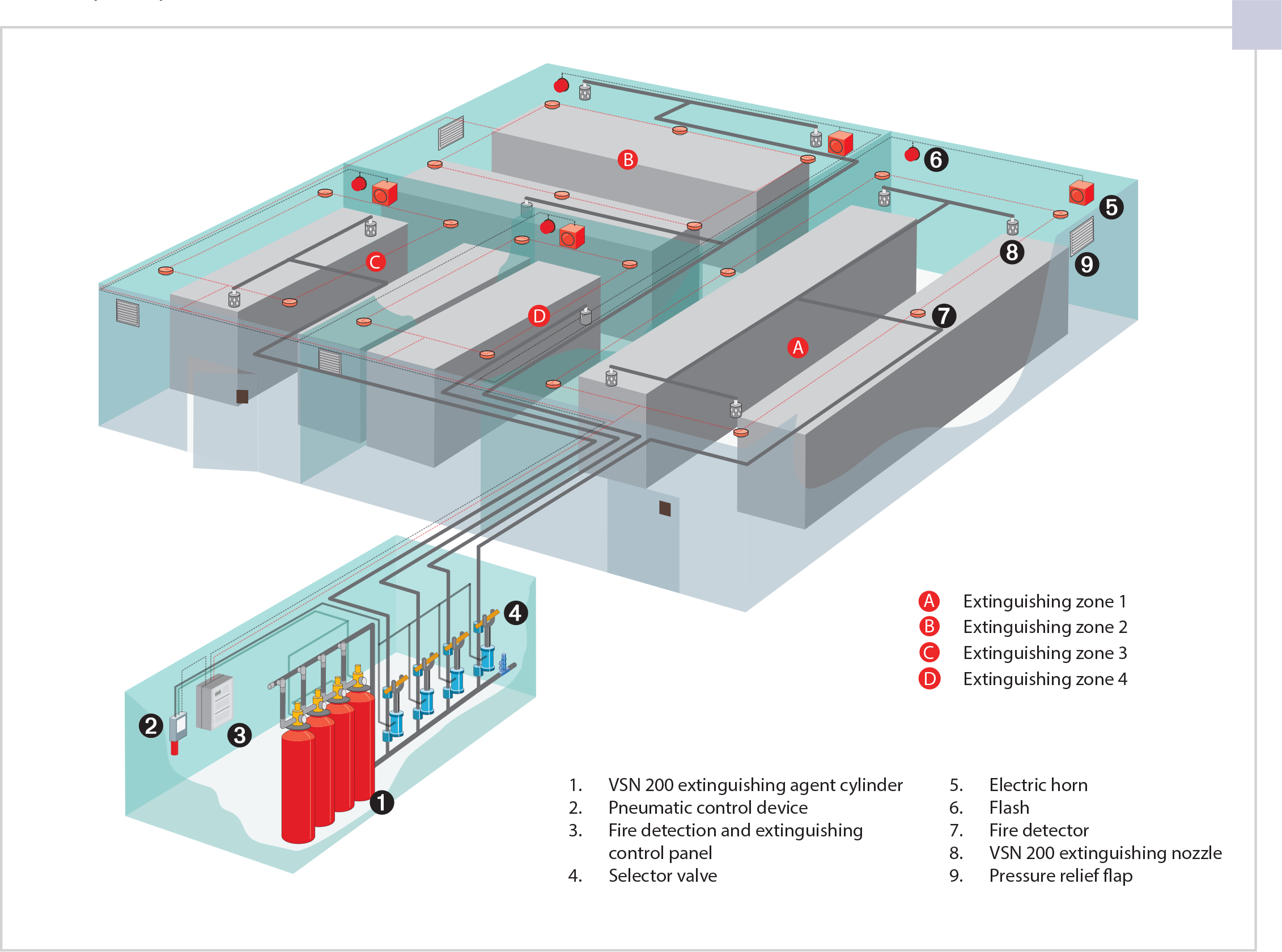 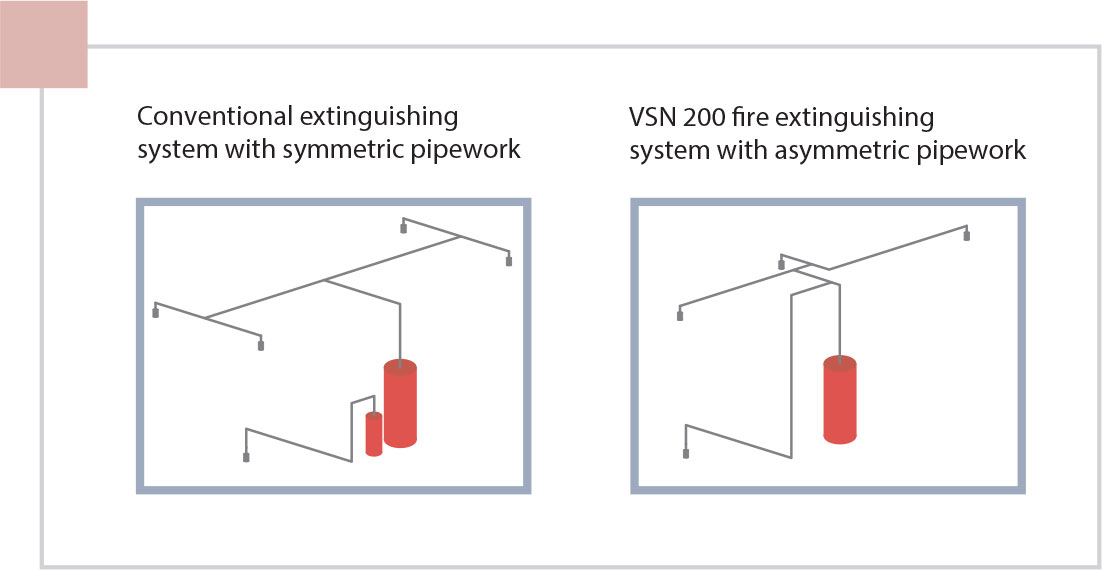 In the pipework, a two-phase flow - composed of liquid HFC-227ea and gaseous nitrogen – is generated after activation of the extinguishing system; this presents a particular challenge for the hydraulic calculation when planning the system.

VSN 200 fire extinguishing systems are designed for specific projects with the Viking DesignManager. This design programme is based on a specially developed simulation model for the two-phase flow, which has been verified in numerous flow tests on extinguishing system models.

Thanks to the calculation accuracy of the Viking DesignManager, extinguishing systems can be optimally designed - both as regards safety systems and from an economic perspective: the designed extinguishing systems have been proven to be dependable and effective. Unlike conventional design programmes, the Viking DesignManager is also able to calculate complex and asymmetric pipework, thus offering more flexibility in the system design.

Whether a 50 bar or 25 bar system, symmetric or asymmetric pipework – Viking DesignManager will always find the ideal system version and solution for each project. To further ensure safety in the design of the system, the guided menu of the Viking DesignManager is designed so as to perform an error and plausibility check even while the basic data are entered into the system.

Another highlight: An interface to the AutoCAD software integrated into the Viking DesignManager offers a convenient design of the installation and makes it possible to import the result into the project documents and system records afterwards.

A class on its own

VSN 200 fire extinguishing systems are particularly suitable for the protection of spaces with electrical and electronic facilities, even if people are present in the premises.

All system variants and options of the VSN 200 fire extinguishing systems are UL-listed, FM-approved and tested and certified by VdS Schadenverhütung. Approvals by other international certification bodies are also available.

There are many reasons for choosing a Viking VSN 200 fire extinguishing system: 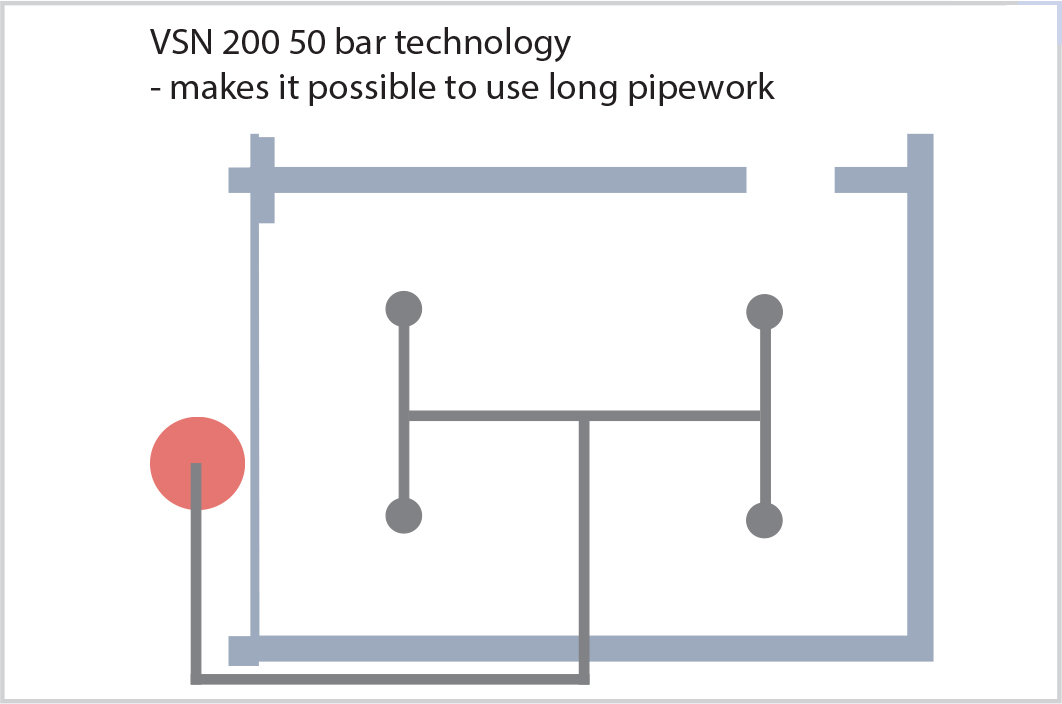 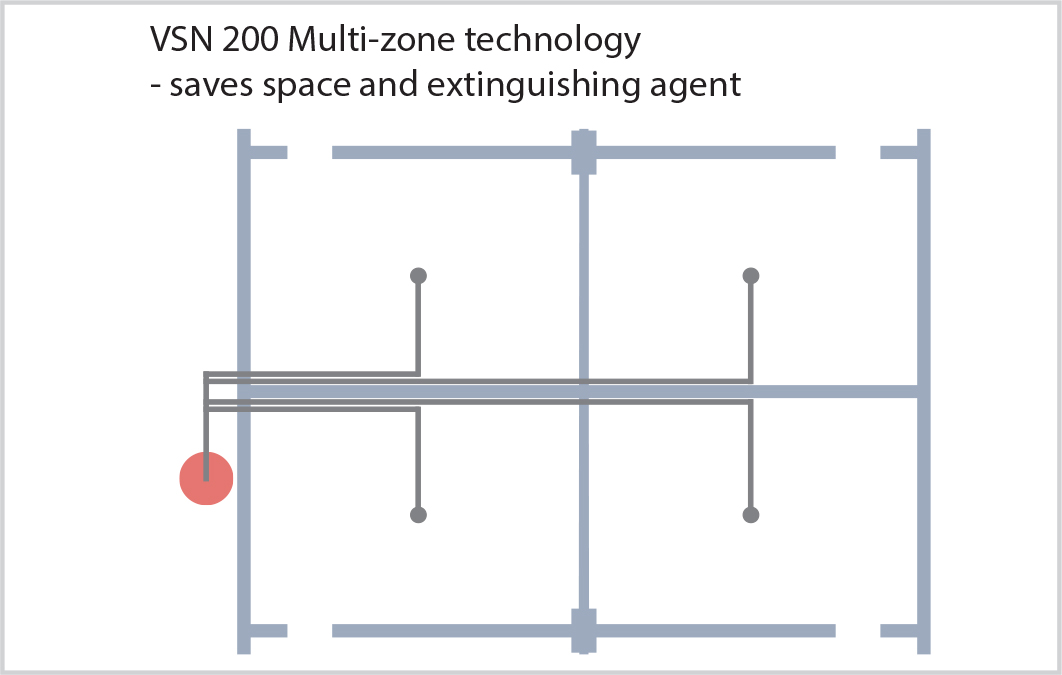 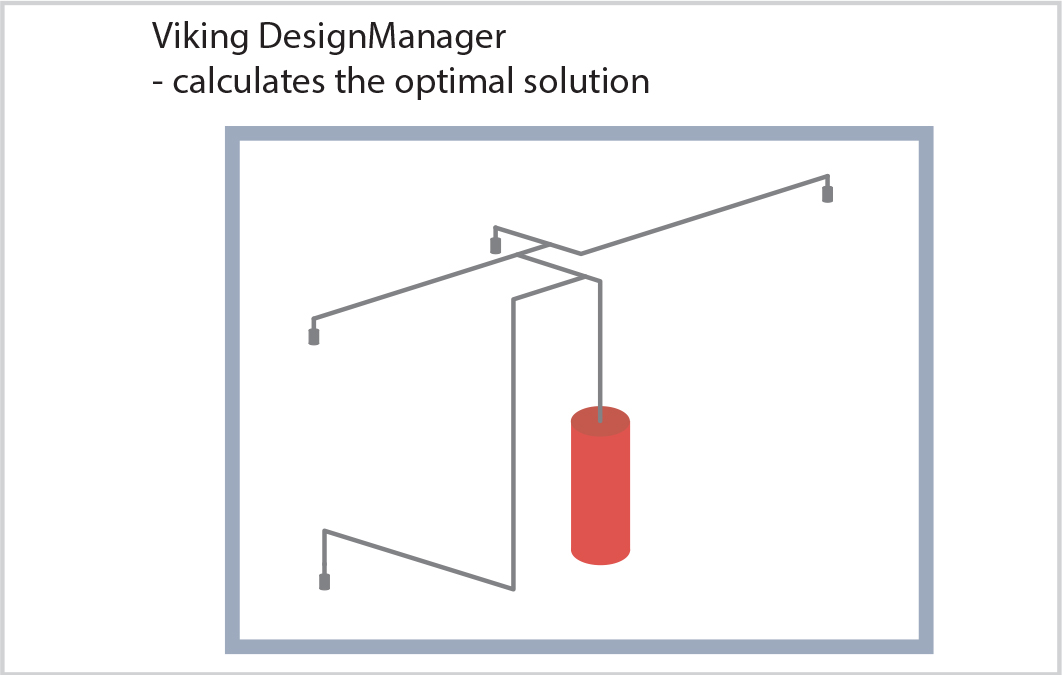 For further information, please contact your local Viking sales office or refer to the technical documentation. The contents of this publication are subject to modifications without notice.